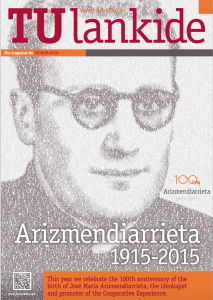 22 April 2015, was the hundredth anniversary of the birth of José María Arizmendiarrieta Madariaga, the founder of the Mondragon co-operatives.

An important event to commemorate the birth of the man who inspired the Cooperative Experience which started in Arrasate-Mondragón. “Don José María”, as he was known by his fellow students, was a visionary priest (ideologist of projects such as Caja Laboral Popular, Ikerlan, Mondragon Unibertsitatea, Alecop, Auzo Lagun…), a tireless worker and a creator of hope and shared community projects. In short, a unique person to whom the Basque co-op movement wish to pay a double tribute: firstly, in recognition of both his role and his contribution to business and social development; and secondly, to disseminate his ideals and delve deeper into the Arizmendian values.

In TU lankide, the magazine founded by Arizmendiarrieta himself, Mondragon wants to add its small part in this celebration by contributing a series of biographical notes, various interviews and opinion pieces which we have selected for thisquasi-monographic issue. Thus, throughout the year, both in paper format and on the www.tulankide.com website, they will be publishing news articles related to the centenary anniversary.