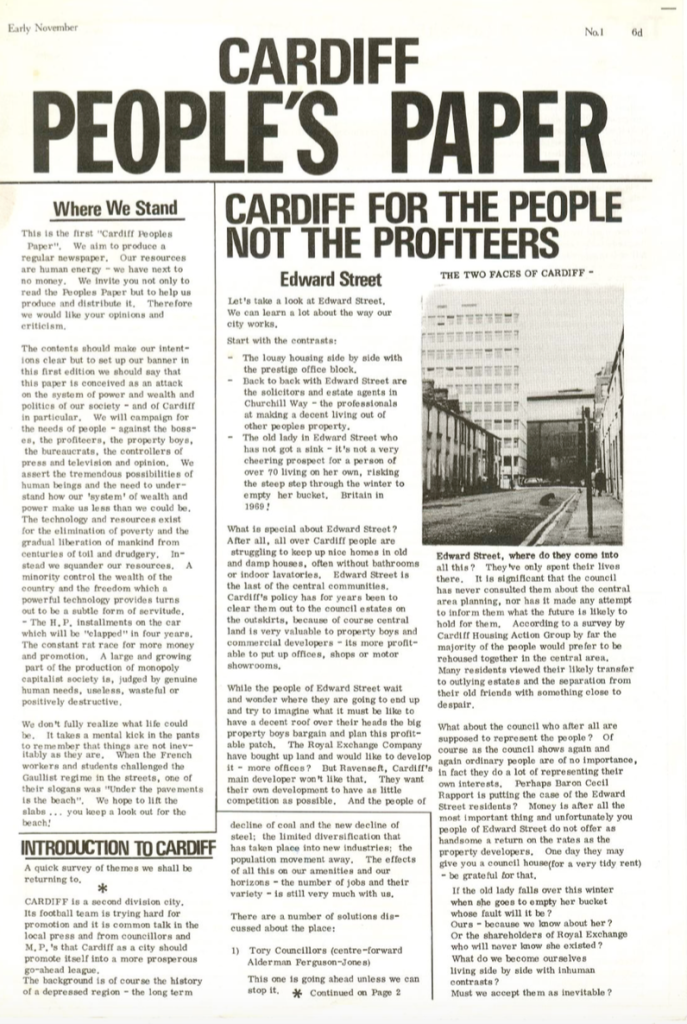 Published from November 1969 to its eventual demise in December 1976, by which time it was amongst the last such paper in the UK. There had been a rash of community papers across the UK, from the West Highland Free Press (still going), Rochdale Alternative Press (exposing Cyril Smith’s activities), Leeds Other Paper, Hackney Free Press to name but a few. All were owned and produced by informal worker’s co-ops, usually all unpaid and operating a collective democracy, and with no individual editor.

I joined the collective from issue 17 in March 1972, and was active until the end. Everyone  had to muck-in, writing stories, typing, Lettrasetting, laying out pages, making tea, selling door to door, and whatever else.

We met once a week in the early evening at the New Ely pub on Wyverne Road before dispersing across the city to sell door to door. Then every couple of months we met (usually, but not always at Bob & Helen Dumbleton’s house) to spend an entire weekend writing, editing and pasting up the paper. It was printed in many different places at first as few printers would touch it, being (correctly) worried about libelous copy, but eventually we settled on the Russell Press in Nottingham, who although a long way to travel, were sympathetic and prepared to take risks.

Many of the editions were too big to go on my scanner, but the A4 editions are available below. The whole set is available at the South Wales Miners Library

In March 2021, as part of a joint residency at Made in Roath about the Hook Road, a mad traffic scheme promoted by the Tory controlled City Council in the early 1970’s, Cat Lewis has produced a new edition of Cardiff Peoples Paper.