The problem.
Since 2010 workers in the UK have experienced the worst fall in real wages for 150 years.  This is reflected in the national income split between labour and capital, with the capital share rising by more than 10% since 2009. While unemployment has dropped, in-work poverty and atypical work with zero or limited employment rights and social protection has spread exponentially.
Precarious work in the UK accounts for over 7 million people; one in five of the workforce. While the number of agency workers has remained stable over the past ten years, the number of workers on zero-hour contracts has increased ten-fold to over 800,000. Self-employment has increased to over 15 per cent of the workforce since 2009, of which 83 per cent are own-account workers with no employees. 1.7 million of the self-employed earn less than the minimum wage, and 3.7 million self-employed workers are in poverty.

Automation and platform corporations are reshaping the future of work with the rise of the gig economy in the UK now accounting for 1.1 million freelancers. The gig economy’s business formula is a reincarnation of ‘out-putting’, with huge savings by digital corporations through the off-loading of employer risks and costs onto freelancers including equipment, insurance, tax, national insurance, accommodation, heating and lighting, debt collection, etc. While most of this work is still part time, the trend is clear as platform corporations increasingly spread beyond delivery and transport to new sectors including teaching, social care, construction, cleaning, professional and technical services.

So, what can be done?
Unions and co-operatives over the past decade have developed a number of possible solutions to these complex challenges as outlined below.

The ETUC research found unions find it hard to negotiate collective bargaining agreements for self-employed workers, though such agreements had been reached in 11 of the 23 countries surveyed. In some countries, including Ireland until 2017, EU competition law has been interpreted by the courts as prohibiting such agreements.

Co-operatives have been successful in providing a range of services for the self-employed. SMart, established in Belgium in 1998, has developed co-working spaces and co-operative services for freelance workers, and acts as an intermediary with customers or outsourcers. Membership of SMart enables access to the rights and benefits usually only available to employees including social security, and unemployment benefits. Additionally, SMart provides its members with contracting, invoicing, payment collection and debt collection services, and guarantees its members payment within 7 days of submitting an invoice for processing. SMart has 85,000 members in Belgium, and 20,000 more members in newer affiliate SMart co-ops in other EU countries.

Union Co-ops – an integrated model whose time has come

In America, 1worker1vote has pioneered a governance model for union co-ops, based on the Mondragon model, and tailored with their support to include a clear role for trade unions at the heart of the governance. 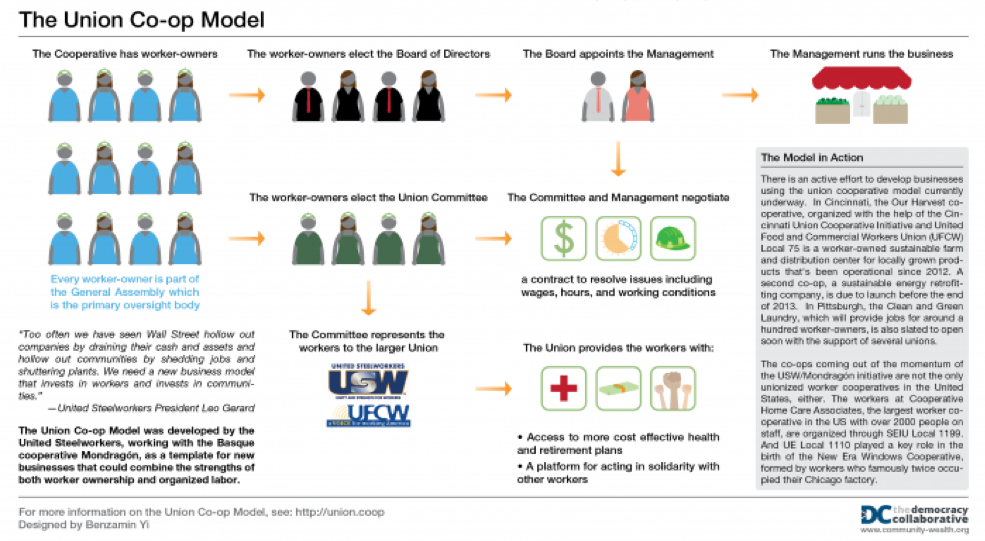 In the UK, Equity and the CPMA network of 30 actor co-ops pioneered a joint collaborative approach in the UK for provision of trade union and co-op services. The Musician’s Union has successfully done the same with a dozen Musician’s co-ops now established in different regions of England and Wales. Taxi co‑ops and Unite collaborate well in Edinburgh to negotiate rates and license conditions with the Council, and in the USA, union supported co-ops have emerged in recent years in Colorado and Wisconsin.

The freelance co-op Indycube, with 35 workspaces in England and Wales, has developed a partnership with Community Union recently to co-develop a SMart style service in the UK which includes joint membership of both.

The United Steelworkers (USW), the largest trade union in North America, has developed a Union Co‑op model as a response to trade union decline, and the pernicious effects of neoliberalism such as off-shoring and wage suppression. The core model promotes fully integrated workplace ownership and trade union representation allowing the benefits of trade union services and worker ownership to be delivered simultaneously. Underlying this strategy has been an acknowledgement that most new jobs since the 1980s have been in the small enterprise sector. Therefore, to provide co-op ownership and trade union representation for any new start up business provides both an entry opportunity for the union, and combats from the outset precarious conditions. SEIU has been developing the Union Co-op model for community nursing, childminders and social care workers. IAM and UFCW local branches have been supporting Union Co-op Initiatives which now are operating in 10 US cities.

Another key area of opportunity for Union Co-ops is worker buy-outs and conversions. The recent New Economics Foundation report for the Labour party highlights that 120,000 small businesses in the UK will transfer their ownership over the next three years. If only 5 per cent were converted to co-op ownership, the co-op sector could double in size. Indeed, research by Co-operatives UK and the Co-operative College has highlighted enabling legislation in Italy and France that promotes co‑operative buy-outs, and provides public policy, tax incentives, and co-operative finance tools to facilitate the process. Should Labour implement such policies here this would represent a clear Union Co-op strategic opportunity.

So, what do we propose?
We propose to constitute a formal collaboration between trade unions and the co-operative movement to be known as union-coops:uk. The intention is to produce a UK union co-op model, taking as inspiration the work of the USW and others in the US. It would support the creation of unionised worker co-operatives in the UK, promulgate the model as a means of addressing employment precarity, and promote more widely the benefits of economic democracy as an essential component of resetting the economy in favour of labour and communities, and away from the diktats and vagaries of capital.

Get in touch:-
Send me a message via the contact page https://www.alex-bird.com/contact/