In the spring of 2015, Martin Price and I were commissioned by the Town Council to produce a new Business Plan for this Historic Hall. 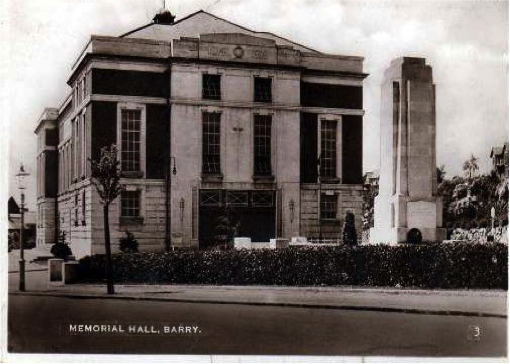 The Hall was originally built in the 1920’s, when the people of Barry felt the need to have a permanent memorial to the 635 men from Barry who had given their lives in the First World War. They decided that it should be in the form of a Cenotaph and a Theatre that could provide a centre for cultural and civic activity in the town. The cost was to be £20,000, an immense sum, roughly equivalent to close to £4m today. It only became a possibility when the Davies family of Llandinam, whose grandfather had been the prime mover in the building of the Barry Docks, issued a challenge to the people of Barry that they would give pound for pound up to £10,000 towards the cost. It was still an immense task and it took the town 7 years of un-remitting effort to raise the sum so that building could be opened in 1933.

The Hall, known locally as the Memo was held in a charitable trust by the Town Council, and this changed to an independent charity in 2006, when the first stage of modernisation and business development started. The Memo has a large auditorium, as well as the largest sprung dance-floor in South Wales.

The new Business Plan we have produced is based on the vision of the trustees to develop the Memo further, incorporating moveable seating and a new digital cinema.